Taking the church to the peripheries: mission stations in Philippines

MANILA, Philippines (CNS) — When Father Victor Sandoval went knocking on doors in one of...

MANILA, Philippines (CNS) — When Father Victor Sandoval went knocking on doors in one of Manila’s toughest slums to tell people he was moving into their midst, he was met with disbelief.

“At first, many didn’t trust us. They didn’t believe we were really Catholic priests, because Catholic priests don’t come to live in a place like this. They thought we were maybe evangelicals or fake priests,” he said.

Father Sandoval, a Mexican member of the Missionary Servants of the Word, came to the northern outskirts of the Philippines capital four years ago, invited by Bishop Pablo Virgilio David, who wanted to reach out to the poor in his sprawling Diocese of Kalookan. Frustrated by the limitations of traditional parish structures, Bishop David had invited religious congregations from around the world to help him start 17 mission stations.

“Many of our parishes are old and tired institutions. They tend to be very parochial, in a negative sense. They are in maintenance mode. They tend to cater to church-going Catholics, but those are less than 20% of baptized Catholics. The great majority of Catholics have nothing to do with the formal church institution. If you ask them their religion, they say they’re Roman Catholics, but that’s about all. Our parishes have tended to cater only to those already close to the church,” Bishop David told Catholic News Service.

Father Sandoval’s neighborhood is a 15-minute walk from the parish church of St. Anthony of Padua, but the distance is social as well as geographic.

“Before I came here, people in the parish told me to be careful. ‘Don’t go there at night, it’s a dangerous area,’ they said. They considered some areas too risky for pastoral work. The priest didn’t want to put his catechists and others at risk. It was easier to invite people from here to go to the parish instead. The problem is that few did that. Only about 40 people, out of some 40,000 residents, were active in the parish,” Father Sandoval told CNS.

So he and another priest moved into a tiny apartment in the middle of Paradise Village, a crowded warren of small streets and tiny dwellings.

“We began by going to the edges of the neighborhood, knocking on doors, sharing a brief reflection on the word of God. Through those conversations we came to know the realities of the people. We then organized activities, including the rosary and Bible studies, and through the word of God helped conscientize people about the dignity to which God calls them,” Father Sandoval said.

Pastoral challenges abound in a neighborhood formed when the government filled in fish ponds with garbage, allowing work-seeking migrants from the countryside to stake out tiny lots where they constructed makeshift dwellings.

“The bishop says our priority is to form communities, but when people come from the provinces they start to focus on survival, which fosters individualism. Because they came from different places, it wasn’t easy to build trust. Where there’s poverty and individualism, it’s difficult to build solidarity and overcome injustice,” Father Sandoval said.

His flock has faced extrajudicial killings, part of a government-sanctioned “war on drugs,” as well as the emergence of gangs, which the priest said began as a way of providing a sense of protection for some residents, yet often devolved into criminal activity. Getting young people from different neighborhoods involved in church choirs and other activities has helped erode the violent divisions. And a feeding program started by Father Sandoval’s mission station has brought together 180 children whose families’ arbitrary differences are ignored by hunger.

“Participation in Christian life can break down walls and form community,” the priest said.

In a nearby neighborhood, Sister Mitzy Perez, a Mexican member of the Missionary Sisters Servants of the Word, staffs another mission station, which she says is making real the bishop’s dream of moving the church closer to the people.

“For years, people haven’t gone to Mass or received the sacraments, including confession or even marriage and baptism, yet now we organize those things here in the mission station. Bit by bit they get closer to the church and feel the church is closer to them,” she told CNS.

“We had activities during Holy Week, at least before the pandemic, and for many it was their first time to participate in a foot-washing or an Easter vigil.”

Sister Perez said the nature of employment available to most of her neighbors makes church participation difficult.

“Most people are so poor they are very focused on how to get money every day. Many work all day, every day, and don’t earn much. It’s tough, especially for the men. They work all day, don’t get home until late at night. Some don’t have days of rest. All these things affect the evangelization we carry out. We give Bible classes in their homes or sitting out in the narrow streets. But it’s hard for men to participate when their days are full of work. And some of the women work in offices, leaving early and getting home late, leaving little time for church activities,” Sister Perez said.

Drugs abuse also poses a challenge. Sister Perez said she has found people selling shabu — the local form of methamphetamine — on her doorstep. Getting people to stop selling drugs is often complicated, however.

“I asked one woman I confronted how much she earned carrying a bag of shabu to the buyer. She said 50 pesos (less than US$1). I asked her if risking her life for 50 pesos was worth it. She said it was enough to buy a kilo of rice for her family. She asked who else was going to give her money. She has four children, and her husband sells things on the street and makes very little.

“I asked if I could help her find other work, but she said I didn’t understand. It’s her brother who’s the seller of drugs. She told me that if she quits, her brother will be angry, and she doesn’t know what he might do to her. I said I would talk with her brother, but she pleaded with me not to talk with him. It’s a chain of things that gets more and more complicated, and makes change really difficult,” Sister Perez said.

While most of the mission station’s activities are led by laypeople — what Sister Perez says is an important part of her congregation’s charism — her physical presence is important.

“The fact that we live here helps them feel close to you. It’s not the same when you only visit. We experience what they experience. When there’s no water, we don’t have water. Like them I have to go out with my bucket and get in line,” she said. “And when it rains and the streets flood, I have to wade through the water like everyone else. All those little things help them feel closer.”

Bishop David said the mission stations are slowing making a difference, rejuvenating the parishes where they are located.

“The priests are discovering a reciprocity between the mission stations and their parishes. That’s essential if we’re going to transform our parishes from maintenance to mission,” he said.

Joy Jacita, a catechist who helps Sister Perez work with youth, said the mission station has made a big difference in her life.

“Before the sisters arrived, I was Catholic but only went to Mass once a month. After they came and we organized Mass here, I started going every Sunday and participating in activities during the week. The church is much closer to the barangay now,” she said, referring to the local unit of government in the Philippines.

Father Sandoval said the church’s closeness to the poor will help transform it in the long run.

“We’ve tried to address both spiritual and material needs, because they’re closely linked. Poverty isn’t the fruit of laziness. It’s an evil that can’t be solved with just one approach. It’s a long process. The best way to work with the poor is to be with them, and learn from their capabilities, energies, and experiences. You can only do that by getting close to them,” he said.

Reject racism to ‘live the way’ Creator intended us to...

Now or never: People must overcome challenges together,...

Amid war, reconciliation among Christians can foster peace,... I have been tasked to help you prepare your full, conscious and active participation... Rise thou that sleepest, and arise from the dead: and Christ shall enlighten thee.... 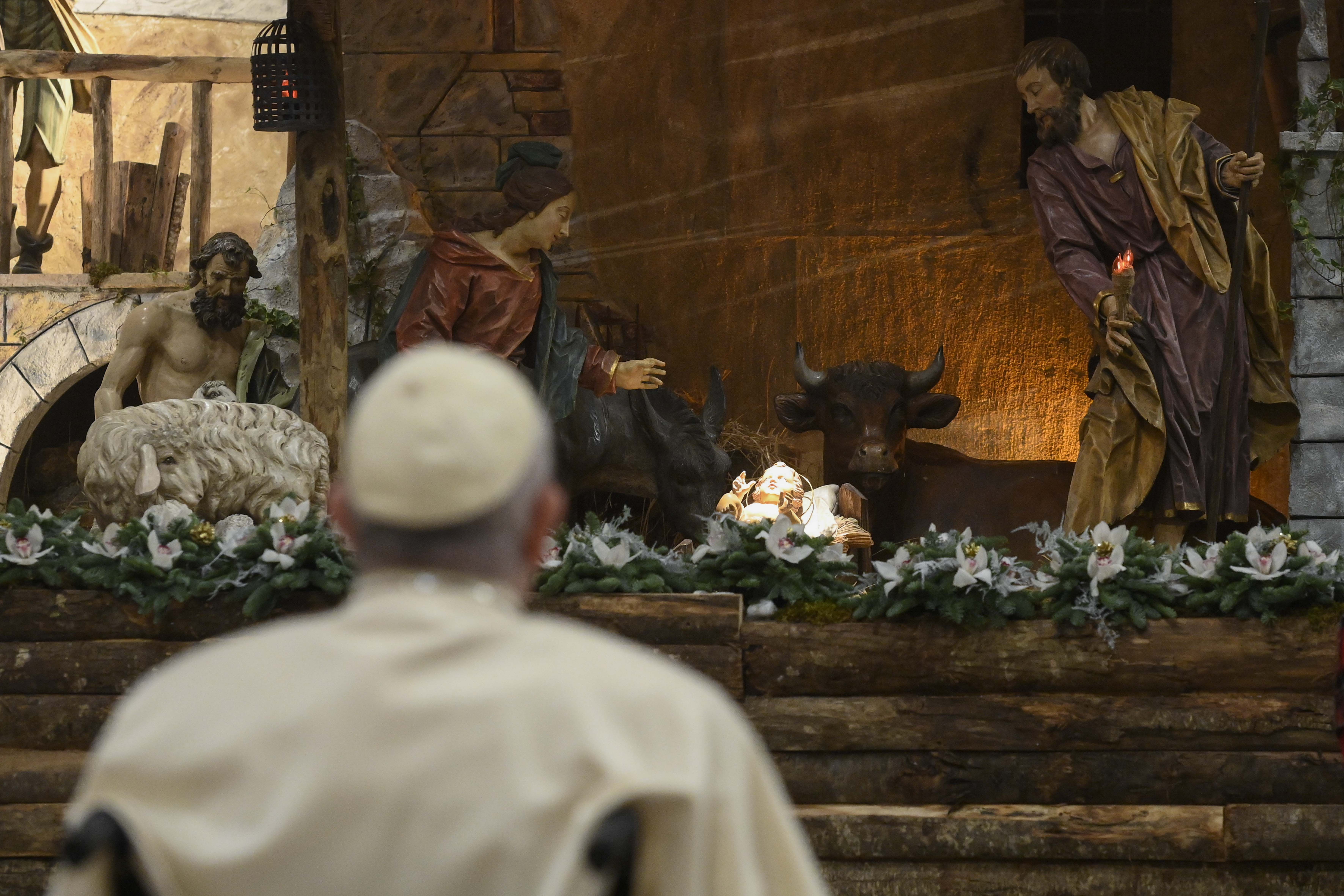 Pope Francis prays in front of the nativity scene after Christmas Mass Dec. 24,...