Why Jordan Peterson’s Surrender on Same-Sex “Marriage” Is Tragic

Jordan Peterson has just released an interview that cannot fail to shock many who have followed Jordan Peterson as a conservative thinker, as it undermines traditional morality in ways that leave one a bit shell-shocked. 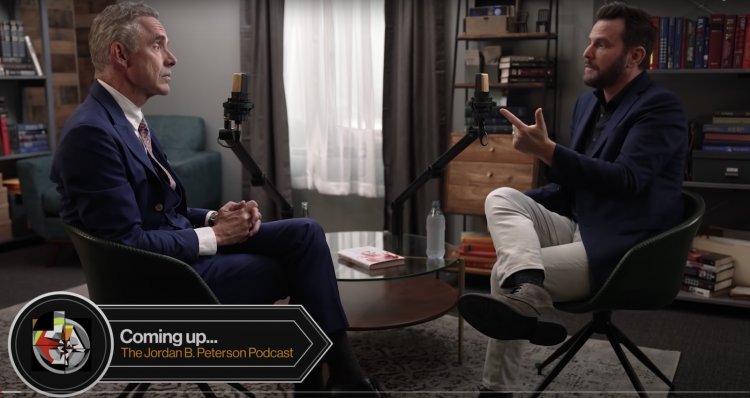 Jordan Peterson is an enigmatic person. Ever since he suddenly appeared on the world stage as a teacher of responsibility, self-discipline, and political incorrectness, he has been controversial.

His tough-love rules for life won him the admiration of many young men who felt empowered by his message. The Left was enraged by his refusal to use assumed pronouns during his university classes. His caustic way of dealing with liberals and “wokism” made him an instant success among conservatives and gained him a large YouTube following all over the United States and Canada.

Many were also impressed by his quasi-religious musings with biblical quotes that never quite affirmed the existence of a personal and Christian God. However, he presented “Christian” ideas in modern, non-Christian ways that supposedly attracted young people. And that was good enough for most Christians. Although professing no faith, he has hinted at an admiration for the Catholic Church to the point that many have suspected him of being a closet Catholic.

However, another side of the bestselling Canadian author only increases the mystery. His books tend to be esoteric, with frequent references to modern authors like Darwin, Freud, Jung, Nietzsche, and Heidegger. The veteran clinical psychologist presents a confusing mixture of existential doctrines, psycho-analytical concepts, and oriental thought that bear little resemblance to anything Christian.

To finish the biographical sketch, a few years ago, the stress of several personal tragedies led him to an addiction to painkillers. A grave situation developed, and he sought treatment in Russia. Only recently, he emerged from that misty trial to try to make a comeback with new books and videos.

The new Jordan Peterson does not have the same traction as the old one. His latest book, Beyond Order: 12 More Rules for Life, did not enjoy the same success as his first set of twelve rules. He no longer has the sold-out speaking tours that made him a superstar.

In this new phase in his life, he has just released a podcast video that cannot fail to shock many who have followed Jordan Peterson as a conservative thinker. There’s nothing conservative about this episode that undermines traditional morality in ways that leave one a bit shell-shocked.

Dr. Peterson discusses “Gay Parenting: Promise and Pitfalls” in an interview with Dave Rubin, a “married” homosexual. Mr. Rubin is an author, comedian, and “conservative” political commentator. He is best known as the host of The Rubin Report, which airs on BlazeTV. The episode is about Mr. Rubin’s intention to become a parent. Even more concerning is how the host spins the conversation to make such parenting sound conservative against a more radical “woke” establishment.

There are three main problems with Dr. Peterson’s presentation of the matter.

The first problem is his frank concession that same-sex “marriage” has become normal. Dr. Peterson became a countercultural hero because he refused to use pronouns that did not reflect biological reality. In the podcast, he now has no problem referring to Mr. Rubin’s companion as a “husband,” which represents a social impossibility.

His discussion treats this new “family” as something real, not counterfeit. Thus, Mr. Rubin talks about forming a homosexual “family” and even “having” children (via surrogates). They even speculate together about how to overcome the lack of a mother by the presence of a nurturing male and inviting visiting female role models to help raise children inside Mr. Rubin’s same-sex household. Dr. Peterson looks for ways to accompany the evolution of the family by including a same-sex expression.

“This is a political issue. We’re trying to sketch out a pathway,” he says and later concludes the culture appears to have decided that “gay” marriage has become “part of the structure of marriage itself.”

However, the telltale sign of capitulation is found in several references to marriage as “the union of two people.” He departs from the only definition that can describe marriage: the lifelong union of a man and a woman for the purposes of procreation, the mutual affection of the spouses, and the education of children. Ever the Darwinist, Dr. Peterson seems to blame the culture for determining what marriage should be. Nevertheless, he accepts culture’s verdict to extend the definition to include same-sex “marriage” and parenting.

The second problem with Dr. Peterson’s podcast is his attempt to brand same-sex “marriage” as somehow conservative. He does this by suggesting that the highly sexualized homosexual lifestyle can be domesticated by this “marriage” and that this new creation can be a conservative force in defense of the family.

“We’re watching an old world go away, and we’re entering this new world,” claims Mr. Rubin, speaking of his future parenting. “I’m sort of part of this new conservative world.”

Thus, the interview is full of references to the importance of the family and its defense. The two interlocutors even admit that the “ideal” family is one composed of a man and a woman with natural children. However, since almost everyone falls short when following ideals, Dr. Peterson believes it unreasonable to exclude this not-ideal, same-sex “family” from the norms of civilized society. Thus, traditional families should not oppose the same-sex “family” but rather embrace it as an ally.

The myth of homosexual domestication through marriage has long been used as a means to gain acceptance for same-sex “marriage.” However, this taming has failed to materialize. Indeed, Dr. Peterson admits that by opening the doors of “marriage” to homosexuals, the more optimistic conservatives had hoped it might give rise to some kind of normalcy. It has only led to more radical demands. Even Mr. Rubin realizes this radicalization happened and “sympathizes” with conservative misgivings.

Dr. Peterson takes this domestication myth one step further by insinuating that society might be to blame for the excessive and flamboyant homosexual promiscuity, given the lack of structures like “marriage” in that past that could channel these energies to more constructive purposes. He claims hostility and non-acceptance might even “provoke a defiant rebelliousness because you know what happens if you, so to speak, are not allowed to be who you are.”

The final problem is even more bizarre. It consists of the belief that homosexual marriage can represent a force in the fight against the “woke” establishment and the “transsexual” revolution that is now the cutting edge of the sexual revolution.

Such an alliance is risky. Conservatives are asked to take a leap in the dark by accepting this idea. The two offer no proof that this acceptance will have any results. It’s all “uncharted territory.” The important thing is to “have these conversations.”

During the conversation, they admit that the record is not good. Concessions made to homosexuals yesterday led to today’s “transsexual” demands. However, Mr. Rubin’s case is supposed to represent a possible exception if only it can gain acceptance.

“The conservatives that were worried that this is where we were going to end up? In some sense, I should probably be their greatest hero,” asserted Mr. Rubin, “because ‘Oh, here’s someone who wanted to enter civilized society, wanted to affirm most of the long-fought, time-tested ideals, wanted to help defend that world.’”

The message is the homosexual revolution is yesterday’s revolution; the focus must be upon today’s “transsexual” Jacobins. Thus, the two speakers present themselves as defenders of the present abnormal “norms of society.” They rail against the “woke” establishment, “transsexual” tyranny, gender theory, and child grooming. Indeed, both Dr. Peterson and Mr. Rubin have had their Twitter accounts temporarily shut down for “transphobic” content.

However, the conservative experience is that such revolutions are part of a single process united in their doctrine and action. They lead to the destruction of Christian civilization because they violate moral principles. The rainbow flag fuses them all together against morality.

The explorative “conversation” presents its wrong message in a sentimental climate of emotion and sympathy among two friends. That is not the place for this type of conversation. It belongs in the moral sphere.

The notion of sin or the immorality of acts is completely absent from the “conversation.” The impact of such “families” on children also is not considered. Everything is assumed to be proper, albeit a bit irregular.

This ambiguity has always been the problem with Jordan Peterson. As a man of no faith, he has no anchor in Christian or Catholic morality. His strongly evolutionary philosophy allows people to change their morality when society or evolution deems it necessary. His existentialist ideas do not solidly define human nature, which then becomes determined by the culture.

Thus, the conclusions of this “parenting” podcast are predictable. The modern revolutionary authors he cites and admires all point in this direction. Where sin is not considered, everything is possible. When a personal God is at best a mythologized story “fabricated by the collective imagination,” there is no one to know, love, and serve, save self.

Dr. Peterson is famous for his rules for life. Some are commonsensical; others are cringe-worthy (Rule 12: Pet a cat you encounter on the road). Some people might have benefited from the rules since they try to instill a sense of responsibility and purpose in the postmodern wasteland. Without a proper understanding of sanctity and our final end in God, such rules will never fully satisfy and will eventually frustrate.

However, the Catholic Church has the true rules for life. Her teachings contain the wisdom of the ages that guide human actions to seek truth, beauty, goodness, and sublimity that will lead people to God. The Church teaches a moral law that enables people to live virtuous lives according to their nature. The Church understands the reality of the Cross that helps people accept the sufferings that life brings.

Dr. Peterson, who presents two dozen rules in two books, forgets higher rules that embrace truth, not pop psychology. It is best to start with ten basic rules called commandments and build upon them.

Is There a Place for “Praise & Worship” Music in Catholicism?

What the Overturning of Roe Means Outside America

Another Win for Religious Freedom

The Pharisees and the TLM

Pride and Prejudice in a Nutshell

The Rise of Bureaugamy: What It Means for Social Conservatives

Pope Francis warns of the danger of ‘spiritual arrogance’ This episode features Scott Weeman, founder of Catholic in Recovery, to discuss...