A Deacon’s Plea to Bishop Browne of Kerry, Ireland

Editor’s note: this message with a redacted version of the linked column was sent to the diocese of Kerry on November 8th intended by the author for His Excellency, Bishop Browne. We publish this now as an open letter with […] Editor’s note: this message with a redacted version of the linked column was sent to the diocese of Kerry on November 8th intended by the author for His Excellency, Bishop Browne. We publish this now as an open letter with permission.

Author’s preface: when, on 30 October, in Ireland, Father Sean Sheehy preached an orthodox, truth-saturated, wholly Catholic homily about the soul-searing dangers of sexual depravity, he no doubt expected that the local bishop would support him if and when a profane secular society excoriated him for daring to challenge the evils of the day. Father Sheehy was, indeed, soon and bitterly attacked by that society and by many of his own ordained colleagues (cf. Psalm 55:12-14, Mt 10:36). Bishop Ray Browne of the Diocese of Kerry chose, however, not only to abandon Fr. Sheehy, but publicly to reject, reprobate, and repudiate the contents of his homily and to humiliate the stalwart priest. Every deacon and priest who knows about this episode will now question the wisdom of preaching difficult truths (already too rarely done), wondering if his bishop will support him when he is inevitably pilloried for daring to condemn sin. Expect, therefore, many more homilies about the approaching parish ice cream festival.

With sincere expressions of filial respect, I entreat you, after prayerful reflection, to announce that Father Sean Sheehy, in his prophetic homily of 30 October, was proclaiming the truth which sets us free.  “The Spirit that God has given us,” St. Paul teaches, “does not make us timid” (2 Tm 1:7) about proclaiming Catholic convictions even—or, better, especially—if such supernatural principles challenge the ethical fads, fantasies, fashions, or, more accurately, the depravities of the day. The declaration of immutable moral principles, “including those pertaining to the social order” is the right and the duty of the Church (CCC #2032). In a word, souls are at stake—and that is the chief law and the highest concern:  Salus animarum suprema lex (Canon 1752).

“The fidelity of the baptized is a primordial condition for the proclamation of the Gospel and for the Church’s mission in the world. In order that the message of salvation can show the power of its truth and radiance before men, it must be authenticated by the witness of the life of Christians” (CCC #2044). We are called “to infuse the Christian spirit into the mentality and mores, laws and structures of the communities in which [we] live” (CCC #2105). To act in the light of truth, we must know the truth; to know the truth, we must hear the truth (Romans 10:14). Prophetic sermons comfort the afflicted, and they afflict the comfortable (cf. Psalm 40:12).

When our priests preach and teach as they are empowered by grace and obligated by ordination to do, their bishops must champion both them and their message, for faithful priests will be pilloried—but not, please God, by successors to the Apostles. To impede or to subvert what good priests preach is to obstruct the very heart of Catholic conviction; it is to frustrate or vitiate the truth we must have the fortitude to announce valiantly to a spiritually sick society (cf. Isaiah 58:1); it is, in effect, to deny Christ Himself.

I therefore urge you to correct and clarify the severe criticisms you made of Father Sheehy and of the sermon he offered. Freedom, as Pope St. John Paul taught, “consists not in doing what we like, but in having the right to do what we ought.” Genuine freedom, moreover, is liberty from sin—a liberty we will not have unless and until we know right from wrong, good from evil, virtue from vice. And when we hear or read the Word of God given to us by Christ’s devout Ambassadors (2 Cor 5:20), we should offer prayers of thanksgiving, not censorious comments and punitive decrees.

From today’s morning prayer: “let our sacrifice be in your presence today as we follow you unreservedly; for those who trust in you cannot be put to shame.” Amen!

I present this column in the most sincere hope that it will be received as it is written and intended: as a matter of light, not heat, and as a perspective on what may be a kairotic moment for all bishops and priests responding pastorally and truthfully (the two adverbs do not compete or clash) to profoundly difficult moral problems.

New Years’ Examen for Every Trad

He continues His Passion Rather than Remove His Presence I have been tasked to help you prepare your full, conscious and active participation...

Courage is not a onetime choice. It is one we must make every day. We choose it...

The Intertwined Minds of Pope Benedict XVI and St. Augustine

A.N. Whitehead famously said that all Western philosophy is “footnotes to Plato.”... 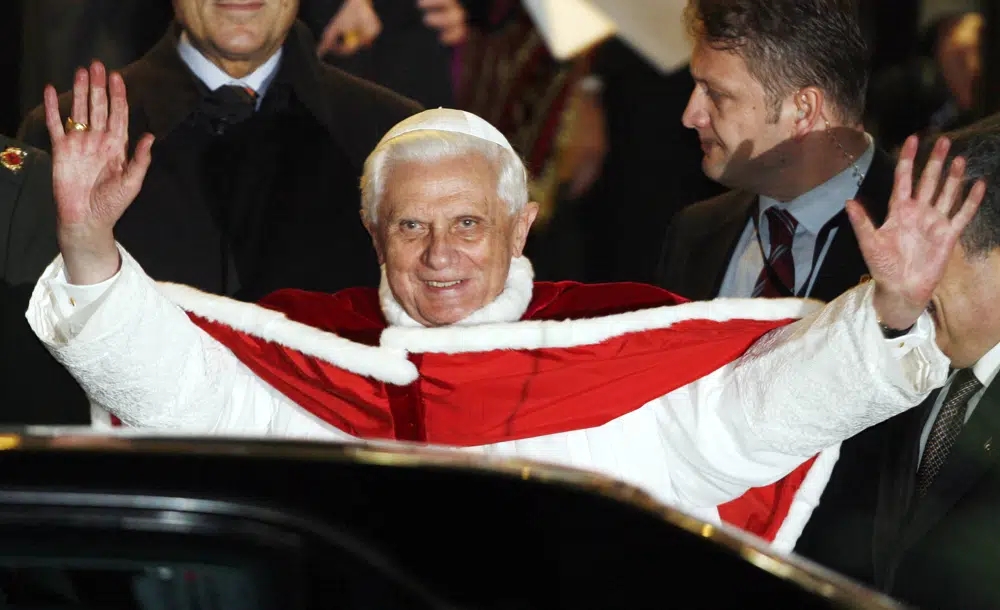 After the Death of Pope Benedict XVI, U.S. Catholic leaders offered their prayers,...